Do you recall when your teacher first taught you about the solar system? Did you raise your hand during Science class to ask some questions out of curiosity? Or were you too shy to ask about a particular species or scientific event that piqued your interest?

Meet Reinabelle Reyes, the person who can prove that asking questions can lead us to places we had no idea existed.

The 38-year-old astrophysicist, who confirmed Einstein’s Theory of General Relativity on a cosmic scale when she was only 26, had stunned scientists worldwide.

Reyes led a team that revealed that Albert Einstein’s Theory of Relativity holds true even in galaxies outside the solar system. After that, she worked as a researcher at the University of Chicago’s Kavli Institute for Cosmological Physics before returning to the Philippines.

Reyes chose to pursue her career as a scientist in the Philippines despite the fact that she has many opportunities abroad because she wants to be a role model for young people in the country.

Agana Louisse Domingo, a B.S. in Physics graduate from Mapúa University who is close to Reyes, revealed to PAGEONE exclusive interview what kind of scientist and person Reyes is.

What are Reyes’ interests as a scientist?

All throughout the years, women have shown significant progress in the field of Science. Reyes is one of those women. Although she earned her MS and Ph.D. degree in Astrophysics in Princeton, she came back here in the Philippines.

“Her discoveries inspired a lot of aspiring scientists – men and women – to pursue their passion. But other than her achievements, I really admire her for being a Science communicator,” Domingo said.

“She travels from Luzon to Mindanao just to give a talk, or to deliver a speech in conferences and seminars. If her schedules aren’t fit, she’s still open for another one. I really love how she talks about Science, encourages the young people and nurtures us – the aspiring ones,” Domingo added.

Reyes, true to Domingo’s words, revealed that she founded Pinoy Scientists in 2012, a blog that features Filipino scientists making waves in fields such as forensics, entomology, and immunology.

It is designed in such a way that it depicts Pinoy scientist lives both at work and outside of their profession, providing not only a description of their work and personal history, but also photographs of them doing everyday activities.

Reyes can also be seen in Science Says, a science education series that explains the science behind everyday questions.

Each episode includes a simple science experiment that viewers can perform at home or at school. It is available to watch on Knowledge Channel’s YouTube channel.

In 2017, she also founded the Trial & Error: Art and Science Collective, a group of artists and scientists who share a desire to create art that makes science fun and accessible.

The group sells their wares at events such as History Con and Komiket, as well as visiting schools such as Philippine Science to reach out to more students. “May Alien Ba?” is a work-in-progress astronomy book, in collaboration with writer Fidelis Tan, artist Ce Manalang, and educator Gary Coronado.

Reyes, as the associate professor at the University of the Philippines Diliman, also established the Data and Computation (D&C) Research subgroup as part of the National Institute of Physics’ Theoretical Physics Group in August 2020.

The group has grown to 13 members since then, with 8 undergraduates and 5 graduate students among them. The group’s current research interests are in data-driven astronomy, which includes gravitational wave astronomy and extragalactic astrophysics, and computational physics and data analysis, which includes machine learning and data for social good. 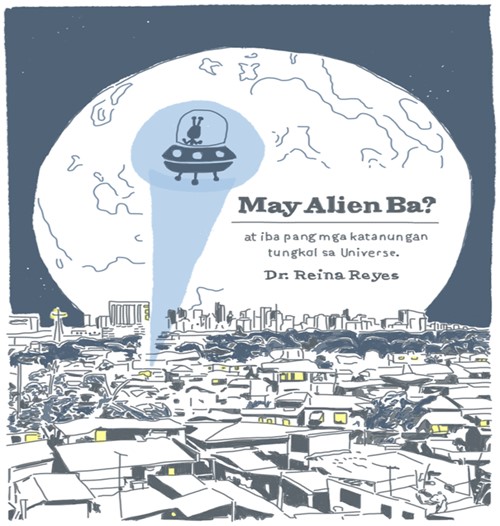 During the PAGEONE interview, Reyes messaged aspiring young scientists to always “Go for it!”.

“Pursuing a life of the mind is immeasurably enriching and worthwhile. You will also find that it is not a solitary pursuit but one filled with opportunities for deep friendships and comradeship. Those of us who have gone a bit ahead are here to welcome you onboard. Find peers and mentors who will help you along and you’ll be well on your way. Ad astra!”, she added.

Reyes proved to the world that women can be great scientists and that Filipinos like her are excellent role models for today’s youth. She displayed that a person who simply asks questions can turn into something great and become an expert in their field, as their great stories influence and reshape everyone’s future hope.